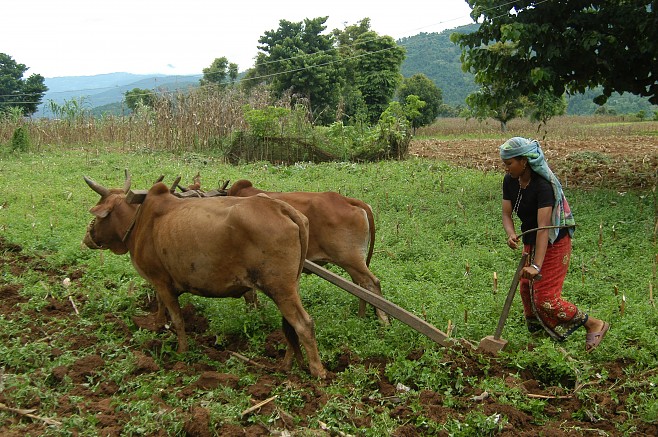 Women farmers grow over 50 percent of food globally. According to Food and Agriculture Organization (FAO), women constitute 45 percent of the world’s agricultural work force, ranging from 20% in Latin America to up to 60% in parts of Africa and Asia. In Africa, women farmers, mostly small farmers contribute 80 percent of the agri production. In Africa and Asia and the Pacific, women work 12-13 hours more than men per week. Despite being a largest work force in agri sector, they do not own land and other production resources vital for farm sector. In developing nations, less than 20% of the women own land. Another dismal fact is – low investment on women farmers.  This was the outcome of a report by Washington based research organization – Worldwatch Institute four years ago. The report named – Investing in Women Farmers, also raised concern about women farmers of India, where they grow 60-80 percent of food but own less than 2 percent of land. Moreover, due to migration of men to cities for work, agriculture is being managed by women in rural areas. The number of women farmers is increasing. Today, 80 percent of all working women of India are employed in agriculture. They comprise 33 percent of the agricultural labour force and 48 percent of self employed farmers.

According to the Oxfam report titled “An Economy for the 99 percent” – more than 40 percent of 400 million women living in rural India – a third of India’s 1.2 billion populations – work in agriculture.

In UN summit on sustainable development – one of the significant targets that were set was – to end hunger, achieve food security and improved nutrition and promote sustainable agriculture by 2030.  The question is how we match the goal with unequal gender participation in agriculture. The second question is how we equip women farmers with more rights, income and benefits.

The Global Food Security Index has been persistently highlighting that nations where the gaps in gender inequality is closing fast have more abundant, nutritious, and affordable food. It means when women have equal resources and opportunity, they can produce higher – and higher-quality-agricultural yields.  Various experts say that developing countries must amend their national policies to protect women’s needs and interests. In India, women are deprived of access to credit and benefits of many government schemes as women are not the owners or co-owners of land and therefore the new farming technologies remain inaccessible to them. Technology is very important for women farmers as they also have domestic responsibilities to fulfill. The society norms and restrictions on property and inheritance rights limit the access of women farmers to financial resources, land and farm technology available. Considering the increase in proportion of women farmers, it is extremely significant issue and should be addressed on priority as agricultural productivity and overall agricultural output of India depends to a large extent on women farmers.

The Oxfam report also highlighted, “As women are not recognized as farmers and do not own land, they have limited access to government schemes and credit, restricting their agricultural productivity”.

Various studies conducted in Africa, Asia and Latin America have established that  food security can be achieved by increasing women’s access to productive resources and technologies, including land, market opportunities, decent employment and social protection, and by enhancing their role in decision-making at all levels. Studies also show that addressing the gender gap in India’s agriculture can increase agriculture productivity by 25-30 percent per home. Developing societies can also witness 2-4% increase in agricultural output. Though the Government of India has been running “Mahila Kisan Sashaktikaran Pariyojana” (MKSP) since 2011, as a sub component of the National Rural Livelihood Mission (NRLM) but it has still not achieved desired results especially of raising the income of women farmers.

To ascertain partnership of women in all of its schemes and programs, India’s Agri Ministry has earmarked 30 percent of the funds for women. It has become mandatory to deploy at least one female scientist in every Krishi Vigyan Kendras (KVKs) spread all over the country. Currently, there are 668 KVKs. A gender knowledge portal has also been developed for women farmers in which the data and information related to women farmers have been displayed.

Reema Nanavaty, Executive Director of India’s Self Employed Women’s Association (SEWA) – the world’s largest organisation of informal workers with over two million members, said, “women’s critical role in farming needed to be officially acknowledged. They farm to feed their families but we want them to turn the farm into an enterprise. If you can train women to do that then you can also talk to them about health, education and nutrition and it benefits everyone.”

Agri Policies should focus distinctively the small farmers especially the women farmers and address all the issues that exclude them from benefits because of economic and cultural constraints including access to affordable institutional credit, irrigation and access to water; agricultural research and extension; access to relevant and sustainable inputs; and access to stable markets for selling the output.