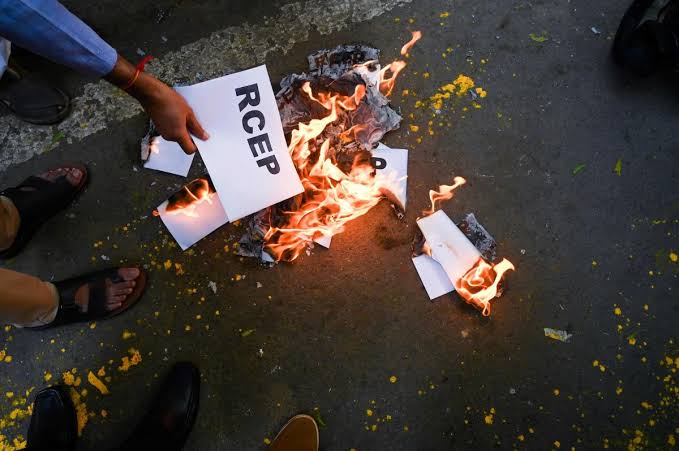 Growing protests from farmers, industry and political parties have forced India not to join the Regional Comprehensive Economic Partnership (RCEP) trade deal. Going ahead with the deal would have destroyed the livelihoods of crores of Indian farmers engaged in farming and dairy sector as it would have resulted in cheap imports owing to the reduction in import duties to zero and near zero.

The other 15 RCEP countries (all members other than India), completed the negotiations for the RCEP agreement and would sign the deal next year.

However, these RCEP nations are keeping the door open for India in case it decides to join at a later date once its concerns are addressed.

“All RCEP participating countries will work together to resolve these outstanding issues in a mutually satisfactory way.  India’s final decision will depend on satisfactory resolution of these issues,” said the joint leaders’ statement.

Prime Minister Narendra Modi, in his speech at the summit in Bangkok today said, the decision of not joining the agreement was guided by the impact that it would have on the lives and livelihoods of all Indians, especially the vulnerable sections.

The All India Kisan Sangharsh Coordination Committee (AIKSCC), a forum of over 250 farmers organisations, Bhartiya Kisan Union (BKU) and Kisan Sangharsh Committee (KSC) from across the country, have been aggressively protesting against the RCEP for the past few weeks and urging the Indian government to save the livelihoods of crores of farmers.