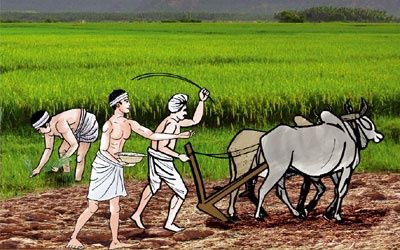 The goal of agricultural development planning and investment in India needs to go beyond the production, productivity and acreage. Important as they are but these three are merely output indicators so far as the farmers as producers are concerned. The outcome from their perspective is to be seen in their gains in terms of profit and prosperity. Addressing second “India Agricultural outlook forum 2018” today, secretary , Agriculture and Farmers welfare Dr. S.K. Pattanayak said that as per the Fourth Advance Estimate a record production of 284.83 million tonnes during 2017-18 was achieved; which means an increase in production continuously for a second year. Horticulture output is also estimated to be a record level of 306.8 million tonnes in 2017-18.

Food inflation based on Wholesale Price Index has remained benign during 2017-18 and 2018-19 (Apr-Jun) at 1.9 per cent and 1.2 per cent respectively due to record food grain production. Inflation in Cereals remained low at 0.3 per cent and 1.5 per cent during the above mentioned period and for pulses it remained negative since 2017-18. In order to incentivize pulses production and encourage farmers to grow pulses, Government significantly increased MSPs of pulses in 2017-18 and 2018-19 (Kharif). National Food Security Mission (NFSM) had a target for additional pulses production of 4 million tonnes by end 2017 which has been successfully achieved, thus significantly reducing the country’s dependence on imports.”

Dr. Pattanayak said bright agriculture outlook doesn’t mean a relaxed life for the Ministry of A&FW. The challenge that such a situation of abundance puts up before us is that of maintaining food prices at levels that ensure farmers get their due profits, while not letting the general consumers remain deprived of the gains of bumper harvest. For tackling such issues, the Secretary said that we have the policy instruments of Minimum Support Price, followed by procurement for Public Distribution System and through both Price Support Scheme and Market Intervention Scheme to modulate the supply in the market. He addressed that in food management the levels of procurement and off-take of food grains under the Public Distribution System and stock positions point to a very comfortable picture.

The Secretary further said that the farmers face numerous problems in both managing agricultural production with the minimum possible cost and selling their produce at the maximum feasible agricultural produce prices because of serious market imperfections. The farmer faces farm input market imperfections which are handiworks of the business and industry involved in the production and distribution of these inputs. Similarly, when it comes to realizing maximum prices the agricultural produce market ground realities disable and deprive the farmers of their due prices. This shows in terms of non-availability of markets as such, and the exploitative nature of functioning of farm business and industry handling in agricultural markets.

Dr. Pattanayak stated that the other factors that enable farmers to profit and prosper by ideal use of their land, animal, water, and forestry resources are related to their ability to maximize their income with a focus on maximizing revenue; and earn more by enhancing their farm business acumen. This requires serious attention to use innovative farm technology and management to increase both produce and earning on the one hand and reducing uncertainties related to crop, prices, and supporting services on the other hand.