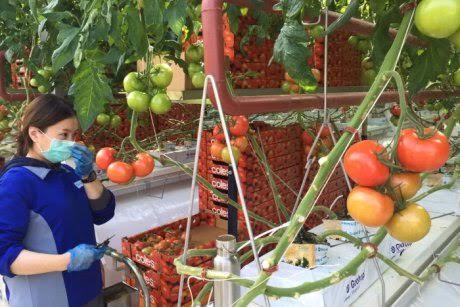 Sunlight and seawater are free of cost. If they can be used effectively, it will certainly reduce the energy and water costs. Its example is the newly opened greenhouse relies on sunlight and seawater to grow tomatoes at 300 kilometers north of Adelaide in Australia.  The company Sundrop Farms spent several years developing the idea at a pilot plant on the outskirts of Port Augusta, before building a commercial facility that is 100 times larger.

“This is a very special project,” head grower Adrian Simkins said. It’s not just a first for Port Augusta, this is a first in the world.
Mr Simkins has spent more than two decades running tomato greenhouses in Europe and North America and says the desalinated water is first-class.The 20-hectare futuristic-looking facility includes a field of more than 23,000 mirrors that capture the sunlight and direct it to a central receiver at the top of a 127-metre “power” tower. At its peak it produces 39 megawatts of thermal energy, which is used for electricity, heating and making water. All the water used for irrigating the crops is piped from the Spencer Gulf and converted into fresh water using a thermal desalination unit. “It’s almost the perfect water,” he said. “You’re taking all the salt out of it, there’s no disease aspects, it’s very pure and then we’re able to enhance it with the nutrition that the plants require.”

Heading the project are Philipp Saumweber, a former investment banker with a background in funding international agricultural projects, and Dutch civil engineer Reinier Wolterbeek, who has a master’s degree in water management. “You need to think about what you have and not so much what you don’t have,” Mr Wolterbeek said.

Not a lot of people thought you could grow vegies in the desert, but I think you can.

“If you think smart about it there is a solution.”

German-born Mr Saumweber, who is based in London, said turning their dream into a commercial reality had its challenges. “I can count the number of times I’ve cried in my adult life on one hand, and two or three of those times have been Sundrop-related,” he said.

“We’ve had a roof blow off the greenhouse on a 45-degree [Celsius] day.

“We lost our entire trial crop. “We lost team members in times when it was most critical.”

While it does not use any fresh water, the solar-driven project still relies on grid utilities for 10 to 15 per cent of its power needs, especially during winter when there is less sunlight. “We have storage on site for about 10 days for water, for heating, cooling, electricity,” Mr Saumweber said.

“But if we have a problem on site we need to rely on the grid.” The commercial facility cost around $200 million to build, with private equity firm KKR investing $100 million in Sundrop Farms. Mr Saumweber said something that helped convince the global giant to get on board was the 10-year contract the grower secured with retailer Coles. “It is unusual in the sense that it’s the longest agreement we have in horticulture,” Coles head of fresh produce Brad Gorman said. “It gives them security broadly about what they’ll be paid and it gives us security about the volumes that they’re going to grow.”

The Port Augusta facility will produce at least 15,000 tonnes of truss tomatoes a year. Mr Gorman rejected suggestions that could saturate the market.

“Tomatoes are one of our top-10 selling lines in the supermarket and they’re growing very quickly,” he said. “Particularly in winter, there is a gap between supply and demand and what Sundrop will do is fill that gap.” Sundrop Farms is also opening greenhouses in Portugal and the United States and has another one planned for Australia.

While it is keeping the details under wraps for now, Mr Wolterbeek said the first step for each project would be to partner up with a retailer. “Once we understand what the client’s requirements are then we design the greenhouse around it,” he said.”It won’t always be a power tower and it won’t always be sea water, but it will always have a sustainable resource angle. “The sky is the limit. I don’t see any limits on growth.”
—————————