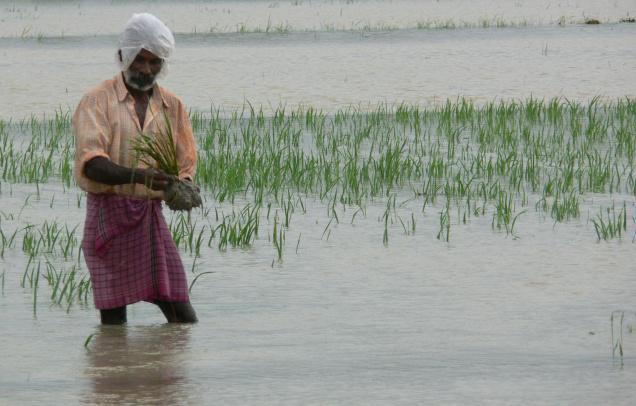 Launched with much fanfare, the Pradhan Mantri Fasal Bima Yojna (PMFBY) seems to have run into rough weather. Sample this. Unseasonal rains have damaged standing crops in Nagaur district in Rajasthan. Hundreds of farmers had been running from pillar to post to bring the damage to the notice of concerned authorities. Farmers complained that with toll free number, email id being faulty and unreachable, they had no idea whom to get in touch with. In neighboring Haryana, the standing paddy crop was affected by a disease in Gohana district. More than 700 complaints were filed seeking immediate damage assessment by the revenue officials. Farmers had to resort to a serial hunger strike for 7 days before the administration promised to get a special girdwari conducted to assess the loss suffered.

While the tussle between farmers and administration continues, agricultural officials in Haryana had refused to conduct crop cutting experiments. Although the Haryana government had prohibited any strike by farm officials revoking Essential Services Maintenance Act (ESMA) for a period of six months beginning September, agricultural officials had said that at a time when Kharif crops had started reaching the markets, any crop cutting at this stage would be unreliable and therefore would go against the farmer’s claim for settlement.

Reports coming from Madhya Pradesh say that farmers had protested at numerous places wanting officials to assess the crop damage. Chief Minister Shivraj Singh Chauhan had promised action within 15 days and compensation to be paid within a month when crops are hit by unseasonal rains or hailstorm. In Maharashtra too, newspaper are full of reports of the failure of crop insurance companies to assess the crop damage.

Take this particular case. According to a news report in Rajasthan Patrika, crops like moong, moth, til, bajra, cotton, chaula, groundnut, guar and jawar were included for crop insurance under PMFBY. The maximum claim that would be applicable in moong had been worked out to Rs 16,130, which is roughly 40 per cent of the total value of the crop. If we look at the estimates prepared by the State Agriculture Department, seven quintals is the average output of moongper hectare. Going by the Minimum Support Price for moong, the total output in terms of value comes to about Rs 40,000 per hectare. So if the crop loss is 60 per cent, the insurance company doesn’t have to pay for the entire loss. Farmers have complained that the State Government had been dilly-dallying in its replies in the State Assembly on the questions being faced on crop insurance.

The reports that I have cited above are simply to give you an idea that probably the Pradhan Mantri Fasal Bima Yojnawas launched without even assessing the problems it would throw up if not implemented properly. The government either did not visualize that there were serious problems in its implementation the way the scheme was designed or probably had too much of faith on the private insurance companies. But what I have been reading and analyzing so far, the Pradhan Mantri Fasal Bima Yojna seems to be an insurance against any possible loss that the private sector insurance companies would incur rather than aimed at providing an insurance cover for the crop losses for the farmers.

Why I feel like saying so is because I find the crop losses and claims that are being worked out are based on open bidding. I haven’t seen crop insurance companies anywhere in the world getting into an open bidding process select areas where they would like to operate. There are roughly 12 insurance companies, including the public sector Agriculture Insurance Company Ltd (AICL), and they are quoting the premiums they are able to offer for each district. Such an exercise determines what the government subsidy is going to be since it has become mandatory for states to share the premium jointly with the Centre. Farmers have to only pay 2 per cent in case of Kharif crops, 1.5 per cent in case of Rabi crops and 5 per cent for horticultural crops.

The difficult areas, which are known to face severe weather fluctuations, are therefore left to the government agency. Even for other districts, I find the variation in the premium limits quoted by the private companies to be not based on risk-based premiums but simply based on their commercial gains. This shouldn’t have been allowed in the first instance. This clearly shows that the government’s intention is to provide an open field to the private sector companies to maximize their profits without any accountability. Take the case of Rajasthan, for instance. News reports say Rajasthan will have to provide roughly 35 per cent of its agricultural budget to implement PMFBY. This is because the insurance companies are quoting a higher premium and the government has no mechanism to force them to reduce it.

The Pradhan Mantri Fasal Bima Yojna is going to be a roughly Rs 18,000-crore business activity, a jump of nearly Rs 12,000-crore from last year’s crop insurance performance. Isn’t it surprising that for getting a scooter or car insured, insurance companies employ agents across the country. But for crop insurance, they forcefully get the premium deducted through banks, and in addition do not have to make any investment for measuring crop losses. I don’t know whether this is being done to make it easy to do business or out of ignorance.

My suggestions to make this scheme more meaningful would be:

1) Stop the deduction of premiums from the bank accounts of loanee farmers. The insurance companies do not even know what crop they have insured for the premiums are collected straight from banks.

2) Stop the bidding process for assessing the insurance premiums. Instead, set up an independent body that provides a weather-based crop profile and also what the premium should be for each district.

3) Make insurance companies build up a skilled workforce for crop cutting experiments. This will help generate employment among the educated and unskilled youth.

4) Make it mandatory for the insurance companies to take a farmer’s field as a basic unit for assessing crop loss and claims. Losses cannot be estimated on the basis of the damage incurred in a block.

To begin with, since 60 per cent of the crop insurance is done in 50 risk-prone districts I see no reason why the government cannot direct each of the 12 insurance companies to implement the insurance policy on a per farm unit basis in these districts as a pilot.

(Writer is a researcher, columnist, author, crusader on the issues of food and agricultural policy. He can be followed on his blog ‘Ground Reality’)