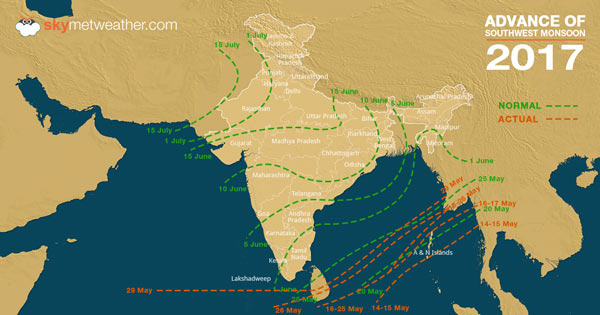 The South-West monsoon season ended officially on Saturday but stirred a debate among the forecasters, Indian Meteorological Department (IMD) and the country’s largest private weather forecaster Skymet, over the accuracy of weather forecast this monsoon. The news has been reported in Business Standard.

The official note on Skymet’s website said, “Skymet Weather had announced its forecast on March 28 and stuck to the same till the end of the monsoon season. Meanwhile, other organizations kept updating their forecast from time to time. In fact, the country’s nodal weather agency, IMD, had also updated its Monsoon 2017 forecast from 96 to 98 per cent.”

The monsoon that progressed steadily in the initial months in June and July became weaker in later August and early September which led to erratic rainfall in the parts of the country. At the end of season the amount of rainfall received was 5 percent below normal. In meteorological terms, it is referred as ‘below normal’ at 95 percent of Long Period Average (LPA).

Both August and September received below normal rainfall, 13 percent and 12 percent below normal, respectively. The IMD attributed the deficit to the intra- seasonal variability due to Pacific cyclones over Bay of Bengal that pulled the monsoon currents and lead to rain deficiency.

As published in Business Standard: Explaining the reasons for inaccuracy, Director General of the IMD, K J Ramesh said, “Such transitional systems are difficult to capture in seasonal prediction models”.

Disputing IMD chief’s theory, Skymet’s Chief Executive Officer Jatin Singh said, “Such extended breaks in monsoon typically happens in an evolving El Niño year and we have always been saying that in our predictions”.

It may also be noted that a farmer from Beed district in Maharashtra had also filed a complaint in July against Colaba and Pune weather stations of the IMD for their inaccurate rain forecast. Based on IMD forecast, the farmer had done sowing but after a brief spell, there was no rain, as predicted by the IMD and it caused him financial loss. This was first such complaint ever filed against IMD.

As published in Hindustan Times, Government’s National Agriculture and Drought Assessment System (NADAMS) has predicted a possibility of draught in 225 districts across 17 agriculturally important states of India due to deficient rainfall and IMD data also showed that 59% of India has received substantially less rainfall as compared to previous years.

As per Skymet, as on September 30, the cumulative rainfall for Uttar Pradesh was deficit by 29%, followed by Haryana 26% and Punjab 22%. Similarly, as predicted, Nagaland and Manipur also remained rain deficient by 25% and 33%, respectively.