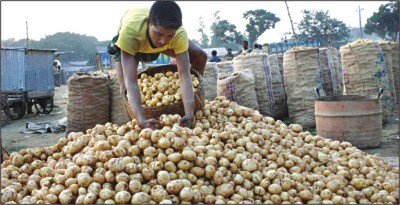 Uttar Pradesh government is committed to addressing the concerns of potato farmers and mulling a number of steps for their welfare, Uttar Pradesh Agriculture Minister Surya Pratap Shahi has said. His remarks came a few days after quintals of potatoes were thrown by farmers in front of the Vidhan Sabha building here.

The farmers were enraged at receiving lower prices for their produce.

“The government is serious about resolving the problems of potato farmers. A sub-committee has been formed and it has already met twice. We are considering a number of steps in the interest of potato growers,” he said.

The panel will submit its report by January 22, he added.

Also, the Adityanath government will felicitate 11 progressive farmers on UP Diwas on January 24, the day the erstwhile United Provinces was renamed in 1950, he said.

“These farmers have done something exemplary in the field of agriculture, sugarcane cultivation, fisheries, horticulture and others,” Shahi told PTI.

He said the government had received complaints regarding wholesalers and retailers forcing farmers to buy zinc powder with fertilisers.

“We have got complaints from Agra and Aligarh divisions. Instructions have been issued to conduct raids and take stern action against such dealers,” Shahi said.