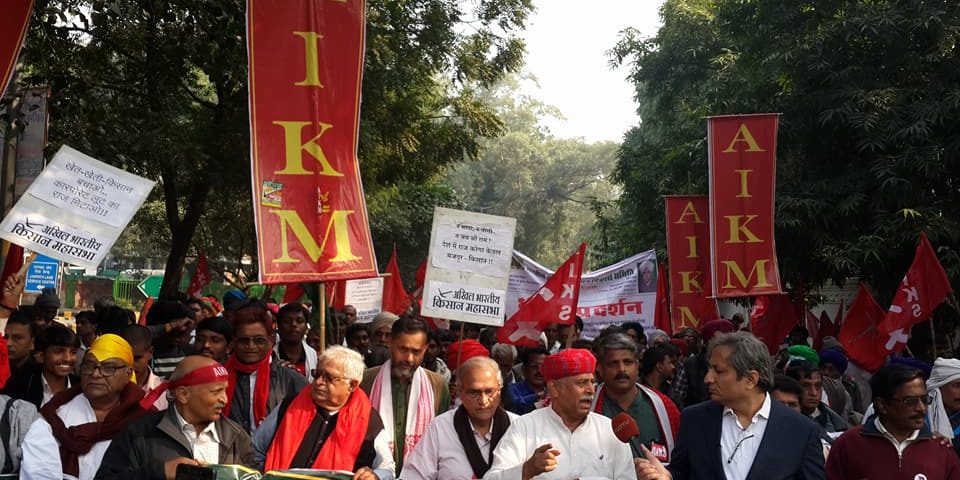 Every provision of the bill was discussed in the parliament and consent was taken from all the participants present by raising their hands.

Hannan Mollah said, “Government has looted the farmers by paying them less continuously and forced them into debt that led to the suicide of more than 5 lakh farmers in the country. AIKSCC will not allow the government to loot the farmers anymore when govts are giving easy concessions to corporate”.

“Now, any small loan waivers cannot work for farmers, we need a comprehensive bill to ensure freedom from debt cycle for farmers”, he added.

Farmers with their demands. Photo: Nirmesh/ANN

Addressing the farmers, MP Raju Shetty said, “We, the farmers, have the capability to overturn the ruling govt. 3 years before, No political party has got clear mandate in the parliament. It is only because of farmer’s faith, Narendra Modi was able to come with clear majority on the promises of raising farmer’s income to minimum 1.5 times of the cost. We will not sit down quietly now”.

Earlier in the day, thousands of farmers marched to Parliament street from Ramlila ground today to participate in Kisan Mukti Sansad that was organized by AIKSSC .Farmers kept reaching the venue in waves with flags. The Sansad started with paying tribute to the farmers martyred in Mandsaur and other police firings, to farmers committed suicide, and to farmers of Yavatmal, who died due to pesticide poisoning.

Devinder Sharma, a food and agri policy expert tweeted, “The massive turnout by farmers on New Delhi streets is an awakening call. Enough is enough. They have been denied their rightful income, deliberately kept hungry all these years. They produce food but an ungrateful nation treats them as burden”.

V M Singh, convener of AIKSCC, said, “we are reminding the Prime Minister of this country about his promises of farm loan waiver and assurance of doubling farmer’s income”.

Medha Patkar and Kavita Kurungati, put forth the issues of women farmers in detail and emphasized the need of passing the bill for loan waiver and ensuring prices of farm produce at least raises to 1.5 times of the input cost.

Yogendra Yadav, leader of Jai Kisan Andolan said, “This is the first time when farmers bearing red and green flags come together and it has become a rainbow when yellow and blue flag bearers also joined. Farmers have faced a lot of betrayal before from politicians and the government but this is not going to happen anymore”.

During the Kisan Mukti Sansad, people also demanded unconditional and immediate release of Akhil Gogoi, leader of Krishak Mukti Sangram Samiti, who is imprisoned for 1 year under the sedition charges and National Security Act.