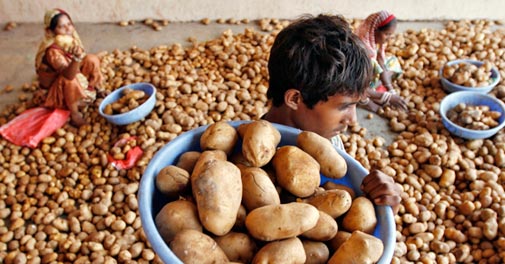 25 Jan 2018
Four months after farmers dumped potatoes on road in Mohali and other parts of the Indian state Punjab, seeking remunerative price for their potato crop, state government has allowed the staple food’s export to Russia and the Middle East.

The past few years have witnessed surplus production of potatoes in the state Punjab. Surplus crop, however, has not been adequately transported to other states.

The price crash is a cyclical occurence in the state, but demonetisation had aggravated the crisis. Doaba has 93% of the state’s sown area of the crop at 80,000 hectares of 86,000.

Jaswinder Singh Sangha, general secretary Jalandhar Potato Growers Association (JPGA):
“If the government fails to intervene to help potato growers, Doaba farmers will be the worst-hit.”Jaswinder Singh Sangha after the decision to allow export:
“We hope for export to Europe and the Americas to start soon as well.”The decision to export the crop was taken during a meeting of members of the Jalandhar Potato Growers Association (JPGA) with financial commissioner, development, Vishwajeet Khanna earlier this week.

Punjab Agro Industries Corporation (PAIC) will be the assisting agency. Farmers will hand over their produce to the agency, which will bear the transport cost in exporting the produce. The consignments will also be insured.

Markfed Punjab – a state cooperative supply and marketing Federation – has also been directed to purchase potatoes and supply it to government schools for use in mid-day meals.

The farmers’ demand of subsidy of Rs 2 per kg on freight is under consideration, government sources said.

“They sought the government’s assistance after they faced problems in recovery of payments from them.”

“When we receive the payment, the assured amount will be distributed between the producers and the government agency.”He added that they were also exploring ways to export the crop to Europe and the Americas and expand the state’s reach and fulfill potential.

Vishwajeet Khanna:
“To export there, we have to match their standards in cleanliness and packaging of the produce.”BM Sharma, Markfed additional managing director:
“We have asked schools to give us their demand for potatoes and will supply accordingly for the mid-day meal.”