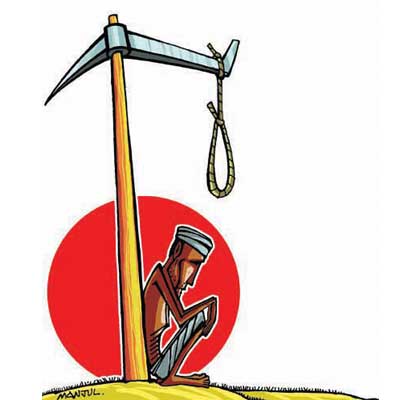 In a reply to Congress MLA Ram Niwas Rawat’s question in Vidhan Sabha, Madhya Pradesh government has informed that 287 farmers have committed suicide in last three months 16th Nov 2016 – Feb 2017. The suicide figure includes 181 farm labourers. In a reply to his question in winter session, govt had informed that 531 farmers/farm labourers had committed suicide between July 1 and 15th Nov 2016. Overall 818 farmers have committed suicide in Madhya Pradesh in last eight months since 1st July 2016.  Ram Niwas Rawat represents Sheopur constituency. According to latest National Crime Records Bureau(NCRB) data, Madhya Pradesh was among the top states to witness increase in where farmers’ suicides.

Talking to Agri Nation, State’s Home Minister said, the state government has taken preventive measures and launched awareness campaign to control suicides, one of which is formation of happiness department. The government has also ensured that people should get due benefit of the beneficiary schemes in right time”. Madhya Pradesh had become the first State in the country to set up a ‘Happiness Department’ last year to calculate happiness index of people.

According to India Meteorological Department (IMD) forecast for March to May this year, above-normal heat wave (HW) conditions are likely to prevail over the core heat wave zone that includes Madhya Pradesh. India faced back-to-back droughts in 2014 and 2015, which was followed by a normal monsoon in 2016. In 2015-16, 90% of the districts were hit by drought  in Madhya Pradesh. According to the NCRB data, there was an increase of 61% in farm suicides in the country due to crop-failure and other farm-related issues.