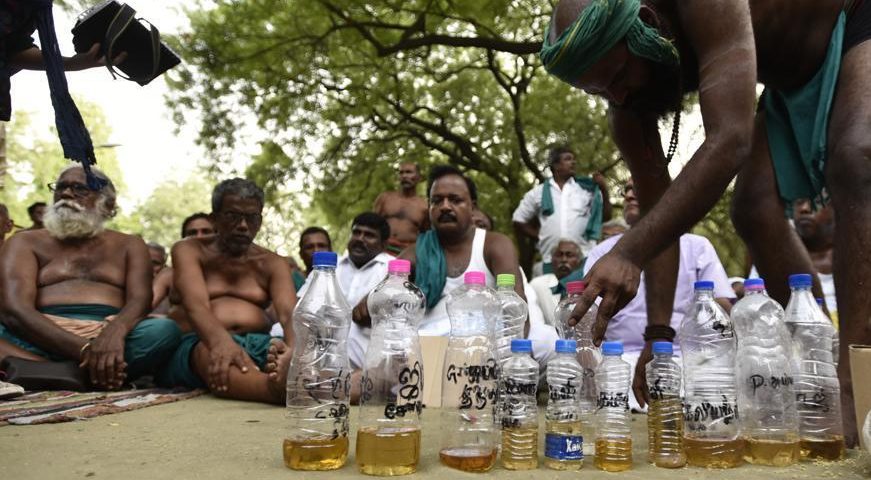 The country has a Union Ministry for Agriculture and Farmers’ Welfare. It is the primary work and responsibility of Minister to come and at least meet farmers. If he will not meet, then who will meet?

What not our farmers sitting on hunger strike under the scorching sun at Jantar Mantar, are doing to attract the Centre’s attention towards their plight. Today, they attempted drinking urine but had to stop as police intervened.  Defying the police, three to four farmers still drank urine. They said, “If police wants to arrest them, it can but they will continue protesting”.  But the attempt of drinking urine could not grab government’s attention as so far not even the agri minister has come to meet them.

After the intervention by Delhi Police, the farmers revised their strategy and decided to collect the urine in a bucket and send it back to Tamil Nadu. “We may not be allowed to drink urine, but it’s within our rights to collect it in a bucket. As we got neither water nor justice in Delhi, we will take our urine back home. We have no water there,” said P Ayyakkannu, President of the National South Indian Rivers Linking Farmers Association, who is leading the protest.

Reacting to the urine drinking by farmers, Devinder Sharma, a noted food and agriculture expert and crusader on farmers campaigns, said, ” I don’t even know how to react to it.  How to express the pain I have felt. Its deplorable. If they cannot uphold the dignity of farmers, it means farmers do not exist on the economic radar screen of the government . This is the extreme step taken by farmers. If nothing is happening now at such extreme step, I think farmers will never hold any protests in future to draw governments attention towards their plight”. He added, ” This country has a ministry of agriculture and farmers welfare. Who will meet these farmers if the farmers welfare minister himself is not coming to meet them. It is his primary work and responsibility”.

The Tamil Nadu farmers are protesting with skulls of dead farmers and clay bowls demanding waiving off farmer loans, revised drought relief package, better support prices for their produce and pension for farmers. The protest entered 40th day today. Over these 40 days, they have tried different acts to draw the notice of government. From running naked in front of Prime Minister’s Office to eating mice, conducting mock funerals, enacting as PM Modi whipping farmers  and today drinking urine. Tamil Nadu is facing the worst drought in last 140 years. They are demanding intervention by Centre to write off their loans from nationalized banks, a revised drought relief package including compensation for crop loss, a pension scheme where farmers over 60 years of age get Rs 5,000 each and writing off farmers’ bank loans. The other demands include formation of Cauvery Management Committee, profitable price for agri products and networking of all rivers by smart waterways project.

While going to meet the Minister of State Road Transport and Shipping Pon Radhakrishnan about their demands, earlier this week P Ayyakkannu told Agri Nation, “As there is no water in Tamil Nadu and PM Modi has been ignoring our thirst. So, we will have to drink our own urine. Modi wants farmers to be like this only”. After meeting him, the farmers had agreed to refrain from their daily protest till Saturday but stay at the protest venue. Pon Radhakrishnan is the only elected BJP MP from Tamil Nadu.

According to the farmers who met the minister, Radhakrishnan had said that he would try to get all loan collections and payments postponed for a year. He had also assured the farmers that any attempt to seize property, would also be suspended during this period. A week ago, in a function at Madurai, the Minister had asked Tamil Nadu government to waive all crop loans like Uttar Pradesh. He had also promised to arrange their meeting with Prime Minister if farmers submit a memorandum to him.

Earlier this month, Madras High Court had also ordered Tamil Nadu Government to waive all farmers’ loans irrespective of land area owned by farmers. The court also instructed officials not to initiate any penal or recovery proceedings against farmers who had defaulted on repayment of crop loans. Later Supreme Court also slammed the Tamil Nadu government for not taking any measures for farmers’ relief and asked Tamil Nadu to file a detailed reply in the case within two weeks time.