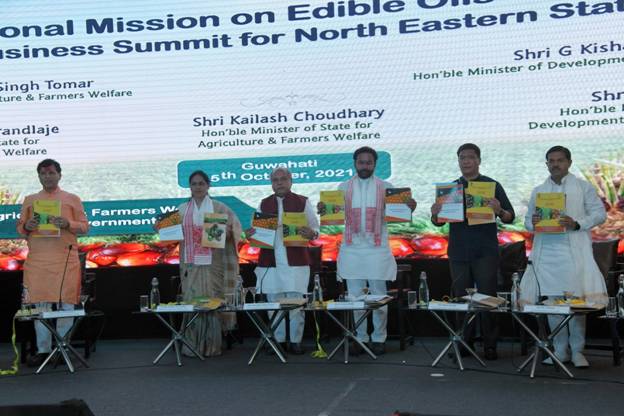 The Union Minister also informed that the business summit has been aimed to explore the target of area expansion, seedling requirement fixed for different states through processors, details of viability gap payment, interventions and assistance under the mission.

Shri Tomar informed that the Mission with a total outlay of Rs 11040 crore would bring additional area of 6.5 lakh hectors under Oil Palm plantation with 3.28 lakh hectors in North Eastern states and 3.22 in Rest of India in next 5 years.

Chief Minister of Arunachal Pradesh Pema Khandu said that it was time for investors to come and invest in NE in a big way to develop the agriculture sector, taking advantage of fertile lands and climate. Palm oil holds special significance as its cultivation can open up untapped avenues of earning for farmers in North East, he said.

Two books titled “Glimpses of NMEO-Oil Palm in NE States” by Oilseeds Division, DA&FW and “Improved Management Practices of the Oil Palm Cultivation in NE States” by ICAR-IIOPR and Assessment Report were also released during the summit