20th livestock census to be conducted from 1st October 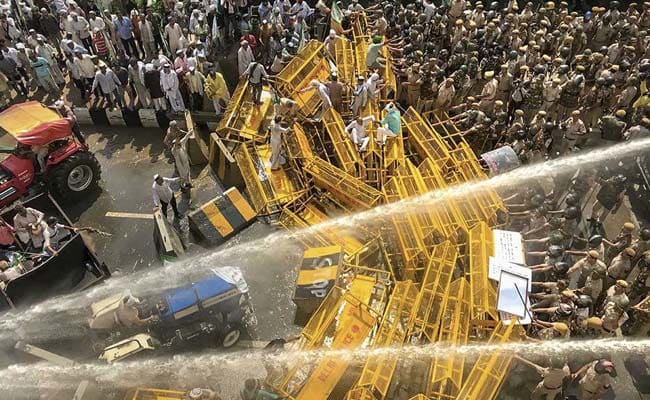 After attacking farmers with tear gas and water cannons, Centre agreed to hold talks with protesting farmers. It is understood that Centre agreed on seven of nine demands. However, centre has rejected the demands of implementing the Swaminathan Commission and complete loan waiver.

The talks between the Uttar Pradesh Government and Bhartiya Kisan Union leaders had failed yesterday and therefore, over 50000 farmers from western Uttar Pradesh and from various far off districts of Gonda, Basti, Gorakhpur, etc, of Uttar Pradesh as part of BKU’s Kisan Kranti Yatra on October 2 marched towards Delhi but were stopped by police, attacking them with water cannons and tear gas near UP Gate on National Highway No 9.

But the police’s efforts to dissuade the farmers from marching ahead failed as farmers riding tractors and trolleys, broke barricades and tried to march on.

The Kisan Kranti Yatra to protest against apathy of Modi led government towards farmers had started from Tikait Ghat in Haridwar on September 23 and was to conclude at Kisan Ghat in New Delhi on 2nd Oct.

The BKU leaders are demanding clearance of pending sugarcane payments besides the implementation of Swaminathan Committee Report. The farmers have also demanded loan waivers and free electricity for running tube wells.

Farmers also said, “Pradhan Mantri Fasal Bima Yojna should be made applicable to all crops and premium must be paid by the government”.

The other demands include the assurance of a minimum income for farmers besides pension of Rs 5,000 for small and marginal farmers who completed 60 years of age. Supporting the farmers, Sitaram Yechury of CPI(M) tweeted, “the only way to save the farmers is to remove the government in power. Modi govt is anti-farmer. The violence by security forces is unacceptable.”

Delhi chief minister Arvind Kejriwal criticised the police action and tweeted his support for the farmers.